Yuval Ben-Ami, son of an Israeli army spokesman, and Husam Jubran, who spent a year as a teen in a wheelchair after being shot by Israeli soldiers, are friends. The two give tourists a powerful experience – learning Israeli and Palestinian perspectives by crisscrossing the conflict by land and history. 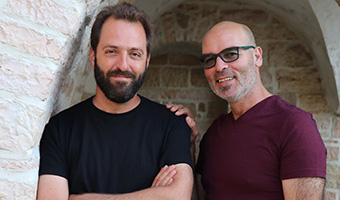 The Tour Guides
By Dina Kraft

They grew up only eight miles away from one another, one in a Jerusalem neighborhood overlooking the Old City, the other in a village his ancestors have called home for hundreds of years on the edge of Bethlehem.

From the outside they might appear unlikely candidates for becoming close friends: Yuval Ben-Ami, the son of a former Israeli army spokesman and Husam Jubran, who as a teenager was shot at by Israeli soldiers – a bullet once hit - leading to a year convalescence in a wheelchair.

By the time they were paired together as co-tour guides giving dual narrative tours of Israel and the West Bank for a Jerusalem-based company called Mejdi Tours, they had both done a lot of thinking and learning about their own societies and what they had grown up hearing was the “other” or “enemy” side.

When they started working together Husam was the more seasoned guide of the two. And he became something of a mentor to Yuval. Together they take tourists on trips most visitors never experience – learning both the Israeli and Palestinian perspectives by crisscrossing the conflict by land and by history. On the Palestinian part of the tour, they visit a refugee camp, holy sites and go inside Palestinian West Bank towns and cities and inside Israel along the stops on the itinerary are more holy sites, archeological ruins, a kibbutz, an ancient desert fortress and the Sea of Galilee.  During the journey they hear from a mix of people with different religions and different political views.

“This is something to bear in mind. We are seldom told untruths, but we are almost never told whole truths,” says Yuval of narratives.

The two have become so close that when Yuval got married about three years ago he and his wife asked Husam to be their “rabbi”. Husam smiles recounting being asked: “That was amazing. That's like telling telling me, ‘you are my real friend’ … he broke all the boundaries in a way when he asked that.”

Husam, a father of four has come to know Israelis through his work. But his children have had less opportunities to meet them. Officiating Yuval’s wedding, he hoped, would send a message to them: “I want my kids to realize it's not about Palestinians, Jewish people, Muslims, Jewish people. It's more or more about injustices. So you need to make that separation between injustice and the people. And that would be a good opportunity that would see me and wedding officiating a wedding putting a Jewish kippa on my head. That would be a good message for them.”

“I have to say that for my wife, Elisha and myself, it came very naturally. We just brought that up. I think it was like the obvious idea … because we love the guy. In the end, he is so close to us and he's is such a such a soul and such a mind,” Yuval told me.

Yuval then added that it may have only taken them a minute to come up with the idea, but in a way, he said, “it's a process that took my entire life. And Elisha’s entire life. We have gone through a journey.”

That journey of trying to go beyond one’s own national narrative and comfort zone began for Yuval in some ways as a curious teenager desperate to visit inside the walls of Israel’s Old City he could see from the windows of his home. Growing up in the late 1980s and early 1990s during the Second Intifadah, it was considered too dangerous to visit and so anxious Jewish parents forbade their children from going there. But as a 17-year-old, he and a schoolmate decided to rebel and go anyway. Not only did they emerge alive, they were welcomed by the Muslim and Christian Palestinian shopkeepers and residents they met.

That sense of wonder and exploration stayed with Yuval, informs him until today. And that is something, along with a passion for history and storytelling, that he shares with Husam. And the two talk about getting into the difficulties of their shared and tangled histories. Their friendship is stronger for it – that they feel safe and secure enough with each other to talk about what’s hard.

Go behind-the-scenes with host Dina Kraft: check out these photos from episode 16!