13 year old terror victim at Hadassah, now breathing on his own 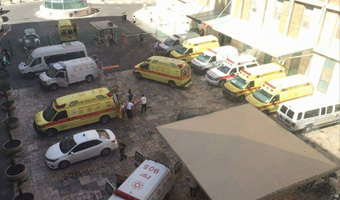 Naor, 13, was putting air in his bicycle tire when he was stabbed and critically injured by, Palestinian Ahmad, also 13. As he tried to run away the Palestinian boy was hit by a car, severely wounded, and was transported to Hadassah Hospital Ein Kerem Naor was evacuated to the ICU at Hadassah Mount Scopus in critical condition. After seven days on a respirator, Naor is currently awake and breathing on his own. A complicated surgery was performed to save Naor’s life. His recovery is attributed to Prof. Eid Ahmed, head of the department of general surgery, his staff, and particularly Dr. Inna Akopnick, a vascular surgeon, who came from Hadassah Ein Kerem to assist.

Since Naor’s identity was kept out of the media, the press was unsure if the boy was alive or dead. Hadassah confirmed that he was alive, in good hands, and was heading into surgery. Ironically, Ahmad, his attempted murderer was claimed to be dead by PA Prime Minister Abbas. He is also alive after being treated at Hadassah and released to police custody.