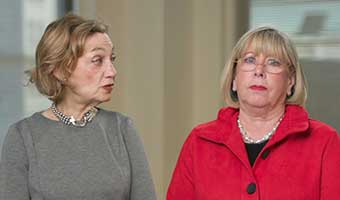 Today, the US House of Representatives voted to pass the Never Again Education Act, bringing America closer than ever to ensuring we will never forget the tragedy of the Holocaust, that students will learn its universal lessons of tolerance, and that educators will be better prepared to teach this absolutely critical subject matter accurately and confidently. This is a major achievement that would not have been possible without the commitment of Hadassah members and our growing stature in Washington, DC.

What's Happened?
We've taken a big step forward in helping the Never Again Education Act become law. The House of Representatives passed the bill by a vote of 393-5. This is a major accomplishment and we are excited about the bill's prospects going forward.

Have We Accomplished Our Goal?
Not yet. There is more work to be done. A similar version of the Never Again Education Act is gaining support in the Senate, which must also pass the bill. Since its introduction in July by Senators Jacky Rosen (D-NV), Kevin Cramer (R-ND), Marco Rubio (R-FL), and Richard Blumenthal (D-CT), more than one-quarter of the Senate has signed on as co-sponsors. In October, Hadassah hosted a special event on Capitol Hill, including Senator Rosen and a panel discussion, to educate and advocate in favor of the bill.

When the Senate passes a version of the bill, and the House and Senate reconcile any differences if necessary, it will be sent to the White House for the President's signature.

What Can You Do To Help?
Today's vote in the House gives the bill momentum in the Senate. But that momentum can only be sustained with your continued support.

L'olam lo od. Never Again. Your Senators need to hear from you today!