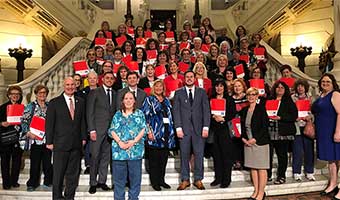 "We have political selves and individual selves. What's happening worldwide should worry us as Jews," said Dr. Shiri Ben Naim, Hadassah hospitals' Head of Rehabilitation Psychology, the Neuropsychiatric Clinic and the Director of the Cognitive Behavioral Therapy Center on a recent conference call with Hadassah members. "But we're also individuals who lead daily lives. We can separate them for most of the day. But we still need to be politically active and also need to keep our routines and raise our children in safety."

In the wake of frequent anti-Semitic attacks across the country, Hadassah members are speaking out and getting involved in national and local efforts to fight anti-Semitism, hate, and white supremacy.

Hadassah has played a key role in advancing bipartisan support for the Never Again Education Act, which would help expand and improve Holocaust education in schools across the US, primarily focusing on areas that lack any Holocaust curricula. As of late May, the act has 156 legislative cosponsors, a 58% increase since May 1.

For Yom Hashoah, Holocaust Remembrance Day, Hadassah advocates participated in a Day of Action in support of the Never Again Education Act, calling and writing Congress through our National Action Center. In conjunction with efforts on Capitol Hill spearheaded by the Hadassah Government Relations Office, Hadassah chapters across the country have also played a critical part though Day in the District meetings with legislators and staff in their home communities.

On the West Coast, members of Hadassah Southern California spent a day speaking with state lawmakers on issues important to the Jewish community. And on the East Coast, as part of Hadassah Greater Philadelphia's Date with the State, Region President Michele Foster spoke powerfully in support of Pennsylvania hate crime legislation. In Florida, as a member of the Florida Hate Crimes Coalition, Hadassah is mobilizing to strengthen the state's hate crime laws.

During a timely webinar on "Anti-Semitism: Here and Now," acclaimed historian Deborah Lipstadt  shared tools with over 100 participants on fighting anti-Semitism, how it differs from other types of bigotry, and how individuals can take action.  Asked how to teach children about this sensitive topic, Lipstadt replied: "They should learn to rejoice in their Judaism and to love Israel. Teach them the positives. They will learn the negatives... The sum total of Jewish education shouldn't be 'how to defend yourself.' Their Judaism should be reaffirming and joyous."

On all levels — federal, state, and person-to-person —we must continue to make our voices heard as part of our Hadassah mission to ensure the the safety of the Jewish community and make the world a better, more tolerant place.


Act now to let your legislators know you stand with Hadassah on the Never Again Education Act, then spread the word.

In the wake of another deadly synagogue shooting, we need Holocaust education more than ever
Swastikas in Playgrounds? The Signs Are Clear — It's Time to Act.
Playing a Leadership Role in Advancing Anti-Semitism Legislation
Taking Proactive Role in Combating Anti-Semitism
A Warm Welcome for Elan Carr, US Special Envoy to Monitor and Combat Anti-Semitism