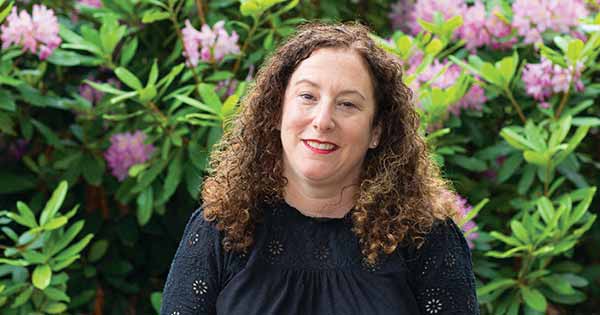 Mindy Gensler, a lawyer who works for the New Jersey Department of Labor, didn’t want to stand by as she witnessed a national surge in antisemitism. So in 2012, she sought out an organization where she could make an impact as a volunteer. She found one in Hadassah and was proud to become a first-generation member. Since then she’s taken on a leadership role as the advocacy chair of Hadassah Northern New Jersey.

“It’s important to make connections with the people who represent us,” says Mindy, who enjoys working in her state to help advance Hadassah’s strategic national advocacy agenda. This way, she says, “they know we’re watching issues that are important to us.”

Mindy has witnessed the impact of Hadassah advocacy firsthand. Hadassah helped secure congressional support for the Never Again Education Act, which provides funding for Holocaust awareness and anti-hate education in schools. On May 29, 2020, the bill was signed into law.

Across the country in the past year, more than 500 Hadassah advocates like Mindy met virtually with policymakers to show their support for US-Israel medical partnerships, combating antisemitism, gender equity in medicine and more.

They didn’t let COVID-19 lockdowns stand in their way. “We had to speak out...and tell our legislators about all the awesome clinical trials Hadassah’s hospitals were performing” to fight the virus, says Mindy, who organized Hadassah Northern New Jersey’s first-ever virtual Day in the District meetings with Rep. Tom Malinowski and Rep. Mikie Sherrill.

With a JD/MS in public policy from Rutgers University, Mindy combines her passion for public service and her legal expertise as the legal liaison at the New Jersey Department of Labor, where she works with state agencies to help protect the rights of workers. She’s known there as a “problem fixer,” a trait she brings to her advocacy.

“At Hadassah, I’m looking at problems that I see in the world and thinking of ways to better advocate for those issues to ‘solve them,’” says Mindy.

Rabbi Jonathan Sacks said, “Tomorrow’s world is born in what we teach our children today.” For Mindy, that means taking an active role in shaping the future through her work for Hadassah. As a mother of two, she’s glad that her children can see her speaking out, just as she took inspiration from her mother, a teacher, who made activism a priority and was a member of the League of Women Voters.

At Hadassah, Mindy notes that “there are many ways people can advocate and make their voices heard.” She’s proud to be part of an organization that’s making an impact.

‍As featured in the 2020 Hadassah Annual Report, released in July 2021.

Join Us! Become a Hadassah Advocate

‍Read more:
Standing up against antisemitism: Hadassah Members Fighting To Keep Anti-Israel Policies Out Of Education.