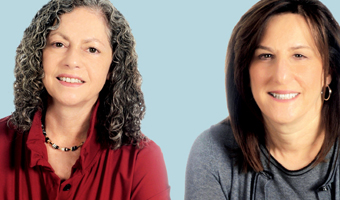 In Greater Detroit, Hadassah members Suzanne Lowe and Diane Brody are an advocacy power team, the spark behind their region’s successes in building support for the Never Again Education Act.

As advocates, they led Hadassah Greater Detroit’s efforts to secure cosponsors and support from Michigan’s congressional delegation — Democrats and Republicans — for the legislation, signed into law in May 2020.

“Even though the focus of the Act is about the Holocaust, the language includes the importance of preventing genocide and bigotry against any group of people,” said Lowe. For more than 30 years, Lowe worked as legal counsel in a nonpartisan Michigan Senate office. In that role, Lowe was not at liberty to be active politically, since it would be a conflict of interest. When she retired, she easily transitioned to her new role as volunteer advocate, meeting with staff of Michigan Representatives Elissa Slotkin and Tim Walberg. Rep. Slotkin signed on as a cosponsor after the duo met with her deputy district director.

“My husband and I talk about antisemitism,” said Brody. “I never experienced it growing up in Southfield, Michigan, a largely Jewish community. In this climate, breaking into advocacy on this bill was a perfect fit — nonpartisan and noncombative.” The legislation establishes a federal program and $10 million grant fund over five years for Holocaust and anti-hate education.

For Lowe, it was different. Shy and reserved as a child, she soaked up everything around her, including her seven-year-old sister being called “a dirty Jew,” and her grandmother lamenting “the six million.” In college, she read Elie Wiesel for the first time in a class about the Holocaust taught by a rabbi. “Not only was it eye-opening,” said Lowe, “it changed my outlook on humanity.” And set the stage for the next stage of her life: law school, then a career in government to make changes.

Lowe’s connection to Judaism has grown with time. “My father passed away recently,” she said. “We were close — he was so pleased when I joined a congregation and became involved with Hadassah.”

For Brody, Hadassah runs in the family — her mom and grandmother were members. “My parents were always active politically. My older sisters and I went to Hebrew school three times a week and had bat mitzvahs at our Conservative synagogue. My middle sister was one of the first females there who got to read from the Torah!”

Today, Brody makes Hadassah a priority, despite working full time, earlier in advertising and now as an account manager for Cox Automotive. As Hadassah advocates, Brody and Lowe relied heavily on Hadassah’s national advocacy team for strategic leadership, talking points and backgrounders. Brody says she used them for the many meetings, calls, emails and follow-up with their national Congresspeople. She also stressed the key role played by Hadassah’s leaders and staff in Hadassah’s National Headquarters in New York and Government Relations Office in Washington, DC, providing tools and resources to help them engage and coordinate Hadassah members in Michigan.

“After the bill passed the House, I followed up with Michigan Senators Gary Peters and Debbie Stabenow, to stay on their radar,” Lowe said.

“Yes, the legislation is now law and the money was authorized,” she added, “but our job is never done.”

We march for change: Hadassah Urges Action From the Podium at No Hate, No Fear March in NYC.