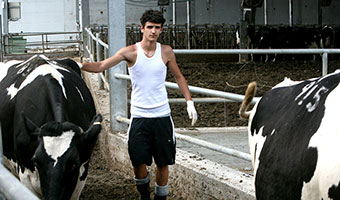 Call him Boris. He knew violence close up. His alcoholic father beat him, his sister and their mother. Then he abandoned them, taking all their money. His mother’s new boyfriend was also violent and is often incarcerated.

Boris’s mother has had a new baby. To complicate matters, both Boris and his older sister suffer from childhood diabetes. His sister managed to keep hers in control, but Boris requires frequent hospitalization. The welfare department found no food in the home and took Boris and his older sister out of the home. His sister went to the Meir Shfeyah Youth Village, where she is thriving. Boris went to a home for younger children, but begged as he approached age 13 to be together with his sister.

“He’s such a charming and bright boy that you can’t help being charmed by him,” said Maayan Burstein, the psychologist at Meir Shfeyah.

However, despite his joy at being with his sister in the first months of school, he has been hospitalized five times — health crises that “which bring him attention but which are very dangerous. We have to find other ways for him to receive positive attention that he deserves."

“Social services want to move him to a smaller environment, but he wants to stay here. His sister wants him to stay. His mother wants him to stay. Even his biological father turned up and said he wants to stay. We and his fellow students want him to stay, too. We don’t want to give up on him. He now has constant contact with the nurse and the campus health clinic. We’re all fighting for him. Wait and see — we're going to win this one," says Burstein.
—by Barbara Sofer

Youth Aliyah sets at-risk children in Israel on the path to a successful future. Since 1934, over 300,000 young people from 80 lands have graduated from Youth Aliyah. Read more about Hadassah's three Youth Aliyah villages.